While the pyramids of Giza are incredible to see both near and afar, and the Statue of Liberty is something which thousands view and regularly admire, there are plenty of 21st century buildings which are a wonder to behold as well.

Not only for their sheer size, but also for their abstract and surrealist nature.

The Cubic Houses in Rotterdam

Found over the pedestrian bridge in Rotterdam, the abstract yellow and white houses look a lot like a surrealist take on trees. The architect, Piet Blom, has stated that they are meant to represent a forest of cubes, with each individual cube being the representation of an abstract tree.

The tilted hexagonal shaped outlines of the trees conceals a three-level split within, with the triangular bases of them contain a living area.

The Crooked House in Poland

Considered to be the most photographed destination in Sopot, Poland, the crooked house was created by the architectural duo of Szotynscy and Zaleski.

The design is based upon the style of prominent artist Per Gahlberg coupled with the beautiful folk tale illustrations of artist Jan Szancer, and is a part of the Rezydent Shopping Center, in Poland. 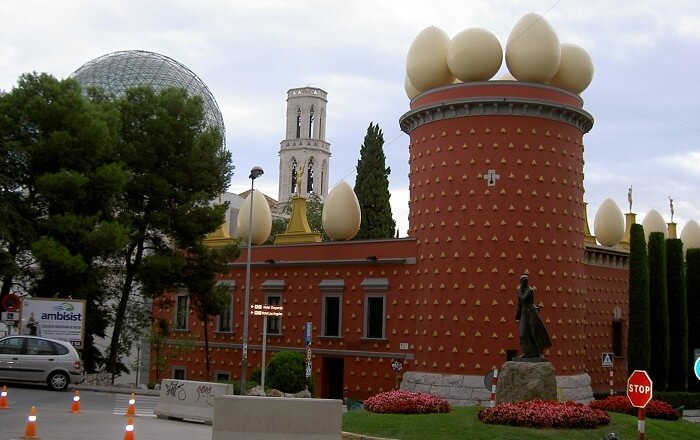 The Torre Galatea Figueres in Spain

With an amazing easter egg design on the building’s roof, interspaced with golden figurines atop the red walls studded with gold, the Torre Galatea Figueres is a monument to Salvador Dalí – a prominent 20th century painter, located in his hometown of Catalonia.

It is one of the most beautiful buildings within the region, and the painter himself lived within the building until his death. The theatre is now a museum to his artworks and the now deceased artist is buried within a crypt below the main exhibition hall.

The HằngNga (Crazy) Guesthouse in Vietnam

Designed by Dang Viet Nga, an impressive female architect who was inspired by the twists and turns of Alice’s fall in Alice in Wonderland, the home is characterised by a labyrinth of winding stairs, sculptural rooms, swirls of colours, and elongated and undulating surfaces.

The hidden crannies and narrow bridges invite further exploration, and the 10-bedroomed house with its themed rooms can be booked for a few days – or toured by the curious like a museum.

The Giant Books of Kansas City Library in Missouri

With titles like Lord of the Rings, A Tale of Two Cities, and Charlotte’s Web towering above visitors, the 22 gigantic books which appear to rest upon the street level as a bookshelf were chosen to hide the parking garage of Kansas City library behind them.

They are an architectural dedication that was chosen by the local public, who voted on which book titles should appear to help represent Kansas City. The giant books have been a hit since they were first unveiled and make a great backdrop for selfies.

Nicknamed Fred and Ginger (after Fred Astair and Ginger Rogers), the cubic-looking dancing house is found on the Rašín Embankment in Prague and is the most modern item unless you count online Roulette NZ to be found within the notably historical area.

It houses the Celeste Restaurant from which patrons can enjoy views of the river along with culinary delights. It was created in partnership by the Czech-Croatian architect Vlado Milunić along with international architect Frank Gehr.