The Strangest Architectural Designs From Across The World

For the most part, the world has adopted square buildings as the norm. This is because they’re easy to design and build, they’re cheaper on resources, and they’re far more practical, especially in a city. Square buildings are what we come across almost all the time – but this isn’t always the case.

Over the years, architects from around the world have pushed the boundaries of traditional design; creating buildings that are both pieces of art and functional.

These are buildings that are so different to what we’re used to that they’ve become iconic in their own ways, and allow us to accept that not everything needs to be uniform and square.

These are a series of houses situated in Rotterdam and Helmond in The Netherlands. Their design is meant to represent a village within a city – high density housing with plenty of space at the ground level.

There are a total of 38 cubes that are all attached to each other, making a forest of angled cubes within the city.

This was first designed by Israeli-Canadian architect Moshe Safdie, and is situated in Montreal, Canada. The idea behind this was to create a communal habitat that was meant to represent a modern community living together in an ergonomic space.

Located next to the Saint Lawrence River, Habitat 67 is one of the many architectural landmarks of Canada, and a testament to their assortment of unique architects from over the years.

Seeing this building from a distance, you’d be forgiven for thinking it was an alien spacecraft landing. The museum is located in the city of Niteroi, Rio de Janeiro, and it’s one of the city’s most famous landmarks.

Built in 1996, and designed by Oscar Niemey, this 16-meter high, saucer-shaped museum attracts thousands of tourists every year, and its amazing architecture is comparable to more famous casino designs, such as those offering bingo for money.

Upon seeing this design, you wouldn’t be wrong if you thought it was straight out of the Flintstones cartoon – because that’s exactly what it inspired its creation.

This amalgamation of stone and concrete really stands out in the Portuguese countryside, and although it was a front door, windows, and a roof, it’s far from the modern home we’re used to.

The Stone House has become a popular tourist attraction in the country, with thousands of people visiting it every year. 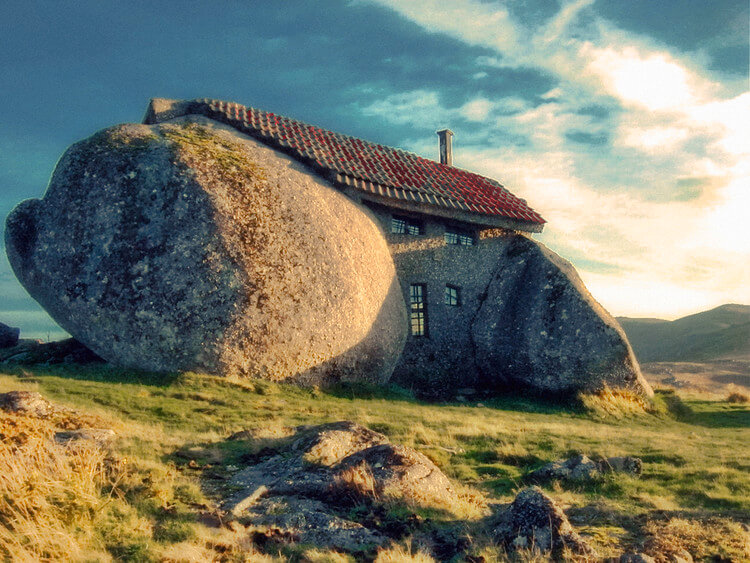 Moving back to the city, we have the famous Dancing House of the Czech Republic.

Also known as Fred and Ginger, this unique building looks more like a bad Photoshop attempt rather than a real design. Created by Vlado Milunic in co-operation with Frank Gehry, this Nationale-Nederlanden building, situated in Prague, has become a beloved part of the city.

This is in stark contrast to when it was first erected, as its design attracted plenty of controversy, but the locals slowly began to warm to the Dancing House.