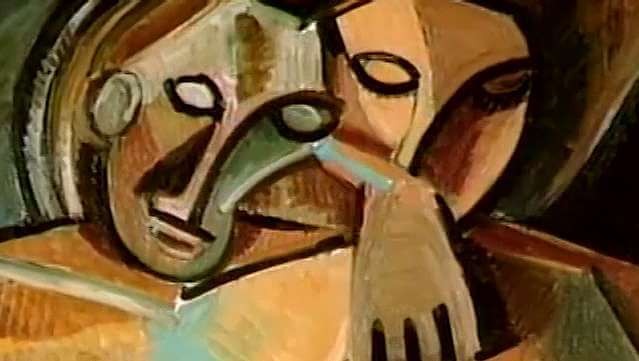 The art movement, which became known as Cubism, was invented by Pablo Picasso and Georges Braque. It was formed around the beginning of the 20th century and, as art historians term it, Cubism was a revolutionary way of depicting reality.

What we mean by this is that instead of depicting a subject as it appears in ‘real-life’, an artist following the Cubist movement would depict that same object in a fragmented way.

Picasso and Braque say that the centuries of realist paintings – such as the Impressionists – which had come before them were inadequate at truly representing the 3D world. This is because everything in our world takes on a different view based on the angle that you view it from.

Cubism takes a three-dimensional object, deconstructs it and reinterprets it according to geometric images. By using these geometrical images, the artist is able to depict all of the angles of the subject in one painting.

Both fathers of Cubism used only enough aspects of the real world, in their works, in order to create a tension between the real world and what was depicted in the painting.

Braque used the technique of faceting, which he developed in order to depict real-world objects. Picasso used the geometry of the faceted paintings of Braque to create a style which was abstract in essence.

The beginnings of Cubism can be seen in the work of Paul Cézanne, who painted his subjects from slightly different points of view as had been previously the norm. Picasso took most of his inspiration from African masks and was a regular fixture at the Quai Branly Museum in Paris.

Regarding his take on painting, he famously listed the features of a person’s face but said that the artist is able to depict them in any order he or she sees fit – not necessarily as they appear on the human face.

Other famous Cubist artists include:

How Did Cubism Develop

It is said that Cubism developed in two distinct phases: Analytical Cubism and Synthetic Cubism. Picasso’s work – Les Demoiselles d’Avignon – is widely acclaimed to be the first work in the Cubist Movement.

Analytical Cubism straddled the latter portion of the first decade of the 20th century and the first couple of years of the second decade. This is the most severe form of Cubism and the artists interwove planes and lines in muted black and grey tones.

While Analytical Cubism lasted five years, Synthetic Cubism lasted two years – from 1912 to 1914. Artists from this period used simpler shapes and brighter colours. Some made use of real-world items – such as collaged newspapers or card from the great games you’ll love to this day – in their artworks.

World War I effectively halted Cubism as a movement as many of the seminal artists of the time were called up. After 1917, Picasso returned to a more Realism-inspired style of painting; however, The Three Musicians and The Weeping Woman contain many Cubist influences. Braque’s work after WWI contained elements of Cubism.