The Most Spectacular Architectural Designs in Singapore

Singapore is a city that is filled with architectural wonders and spectacular examples of professional design.

The metropolis itself is renowned for being one of the most cosmopolitan and functional destinations in the world, and its architecture reflects its peoples’ dedication to order and neatness. Here are Singapore’s top 7 architectural marvels to see on your next international trip!

The ArtScience Museum at the Marina Bay Sands Resort in downtown Singapore is the first of its kind in the world. Opened on February 17, 2011, the museum’s architecture mimics a blooming lotus flower, and was developed and designed by famed architect Moshe Safdie.

The structure itself consists of a round base and 10 different extensions that spread out from the centre. The extensions have all been made into separate galleries with skylights at their tips, and the museum houses 21 galleries in total across 50,000 square feet.

The Esplanade – Theatres on the Bay is one of the most iconic architectural establishments in Singapore, with many believing its design to be based on a local delicacy, the durian fruit. Located in Marina Bay and designed by 2 architectural firms – DP Architects and London’s Michael Wilford and Partners – this 60,000 square metre performing arts hub includes a 2,000-seater theatre and a 1,600-seater concert hall.

Construction of The Esplanade first began in mid-1996, and was revealed to the public in early 2001. It was officially inaugurated by the President at the time on October 12, 2002. 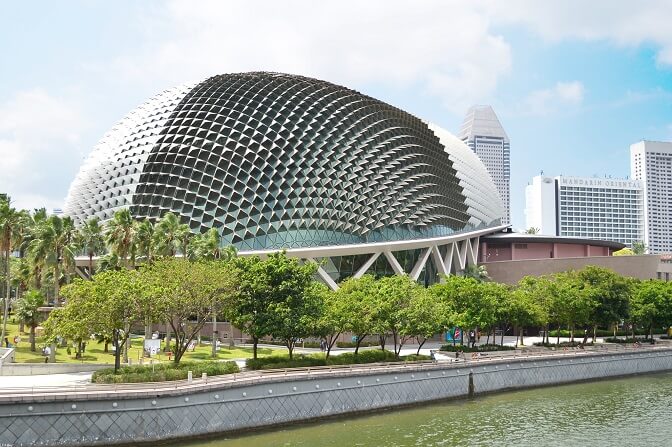 Positioned 36 metres above the ground, this bridge is the highest pedestrian bridge in Singapore. It is known for its unique wave-like shape, and spans 274 metres of curves and twists, as well as ample seating space for pedestrians looking to observe the surrounding views. The bridge is also illuminated by LED lighting at night to provide even more beautiful viewing opportunities.

The Interlace boasts 1000 apartment units and one of the most unique designs to be found in the region. Designed by Ole Scheeren, the complex looks similar to a stack of 31 large-scale Jenga blocks that have been stacked in an irregular way.

The Interlace won World Building of the Year in 2015 during the World Architecture Festival for its expansive range of apartment units, whose sizes vary from 800 square metres to 6,300 square metres. It also offers playgrounds, tennis courts, swimming pools, basketball courts, and even an in-house spa facility!

Marina Bay Sands is a legend among locals and visitors alike, and was designed by the Moshe Safdie Architects. The resort boasts a 2,561 room hotel, a 74,000 square metre mall, and a 120,000 square metre exhibition centre.

Those who usually play at https://mobilebetting.net.nz/slots/ will also get a kick out of the establishment’s massive casino floor, as well as its museum, skating rink, theatres, floating Crystal Pavillions, 150-metre infinity pool, and exclusive restaurants.

Gardens by the Bay is an innovatively-designed nature park that spans 101 hectares in Singapore. The park was created to help transform the ‘Garden City’ into a ‘City in a Garden’, and based on designs by Grant Associates and Gustafson Porter after their work was selected through an expansive international competition.

Today, the park attracts millions of visitors each year thanks to its cooled conservatories, all-weather edutainment centre, Flower Dome and Cloud Forest. The Supertree Grove and OCBC Skyway are also must-sees for keen architectural fanatics!